The post claims CEO Mark Zuckerberg “invented the word BFF” (an acronym for Best Friend Forever) to test the safety of Facebook accounts.

If not, it advises them to change their password immediately because they “may be hacked”.

These posts have appeared in different formats and different languages across Facebook with thousands of unsuspecting users sharing the warning.

One version of the post was shared more than 76,000 times and received almost 87,000 comments, according to Buzzfeed.

It appears some “BFF” comments do appear on the post in green, while others remain in default black text.

However – despite fears in recent weeks of Facebook user data breaches – the latest hoax has nothing to do with your account safety and Zuckerberg did not create the phrase “BFF”.

The new facet changes the colour of text “sometimes” when certain phrases are used in a comment.

Such phrases as “Congratulations”, “Best Wishes” and “xoyo” all bring up their own animations. 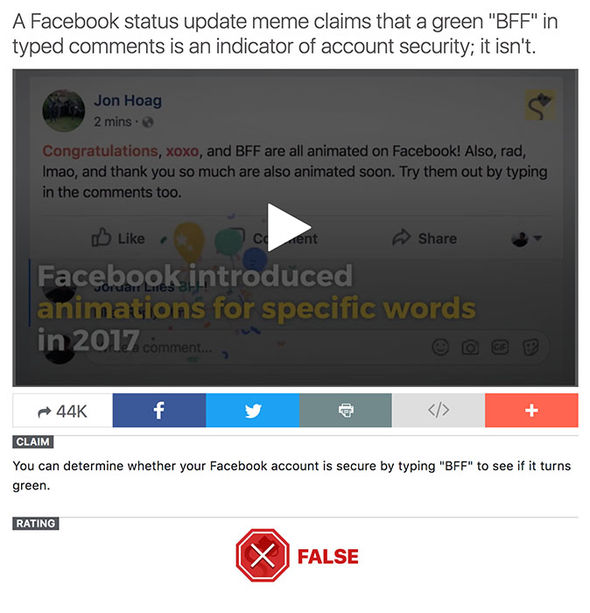 Fact-checker site Snopes has done has concluded the “BFF” post is false.

It concludes: “Although it is true that Facebook comments including the word “BFF” in green are among known animations, its appearance (or lack thereof) is not related to account security in any way.

“A missing green “BFF” does not indicate anyone’s account was compromised ay any point, and instead most likely relates to browser settings.”

Zuckerberg – who remains under scrutiny in the Cambridge Analytica data sharing scandal – gave evidence in the US Congress yesterday.

He took questions from the Senate and judiciary committees, telling them: “It was my mistake, and I’m sorry.

“I started Facebook, I run it, and I’m responsible for what happens here.

“It’s clear now that we didn’t do enough to prevent these tools from being used for harm. That goes for fake news, foreign interference in elections, and hate speech, as well as developers and data privacy.”