MUMBAI: The Rs 12,700-crore fraud at Punjab National Bank has prompted the Reserve Bank of India to ban the use of letters of undertaking (LoUs) and letters of comfort (LoCs). LoUs and LoCs are two of the instruments issued by Indian banks to domestic importers to get foreign exchange from banks abroad at a cheaper rate. 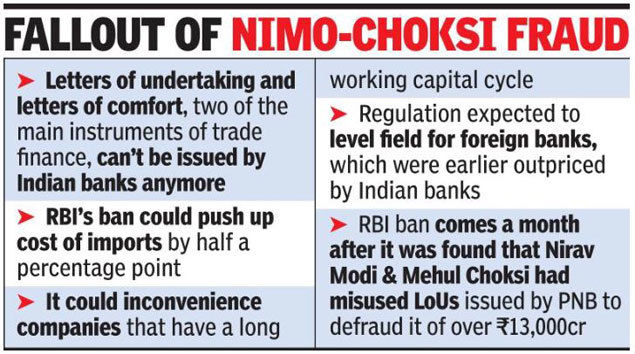 The RBI issued the directive on LoUs and LoCs on Tuesday, about a month after it was discovered that diamond merchants Nirav Modi and Mehul Choksi had misused LoUs issued by PNB to defraud the bank of over $2 billion. An LoU is a type of guarantee between two banks that allows the issuer bank’s customer to get foreign exchange from another Indian bank’s foreign branch in the form of short-term credit.

The RBI decision could potentially push up the cost of imports by up to half a percentage point, besides putting foreign banks on an even keel with Indian banks in financing imports, bankers said.

“This regulation will certainly help global banks that were earlier outpriced by Indian banks, to get back to financing genuine trade finance transactions of Indian corporates and support Indian imports, though withholding tax would add to the cost of the importers,” said Joiel Akilan, ED & chief representative-India of BBVA, one of Europe’s leading banks.

The RBI directive is effective immediately. However, “letters of credit and bank guarantees for trade credits for imports into India may continue to be issued subject to compliance with” existing regulations, a notification from RBI said.

ban on the use of LoUs and LoCs could inconvenience some Indian corporates that have a longer working capital cycle—meaning those companies which take several months to get back the money used in their business by selling their goods, compared to other companies that can recover their money in weeks.

Indian corporates use LoUs to make payments to those companies from which they buy goods to send to India. It is alleged that Modi and Choksi had used LoUs much beyond the limit they were eligible to and finally defaulted on the payments to PNB.